Ochre. Everything around me was ochre. A suffocating ochre that surrounded me in a heat pool. The sun was as merciless as Ra had always been through the ages. Shu was helping Amun Ra, doing its dust storm thing. Michael Jackson was unbelievably calm even when it trotted fast and threatened to drop me off. MJ was my camel for the day. I loved MJ but I thought I would prefer the inside of the pyramid than the outside. Or so I thought. Till I began going up the ziggurat.
Just blocks and blocks of ochre that seemed unending, with no support whatsoever on the side. I tried not to look down because the backlog of history from right up there was dizzyingly scary. The picture of a pharaoh up on a platform commanding his high priest to take the pyramid higher up came unbidden into my head from all those documentaries I had seen. Higher and higher till it became the tallest structure in the entire world.  And the slaves would be carrying those punishing blocks of stone round and round in an onerous unending ritual… 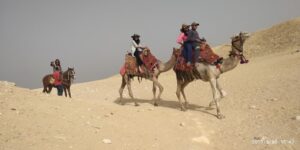 Just the thought made my head reel. I tried to look for a banister for support but there was none. The pyramid was bare. Bare ochre. You find your way through it or you perish. I heard a shout and suddenly, there she was. Nina was calling me in. I was about to tell her that I need to go back and stay down. But I didn’t want to be a dampener in our plans. So, I went along. The entrance was like a pinhole in the needle, the pyramid built of millions of such needles. Nevertheless, I felt a little relief on being out of Ra’s direct glare. Choose your evil- the wrath of the sun or asphyxiation in the caves. I stumbled on to where the shafts were. The path within was a serpentine labyrinth. No paintings or murals or pretty scenes. Or maybe there were and they had been erased or mutilated because of the robberies.
I bent so that my body was practically at half-height, an inverted L. A part of me screamed no, but there were those ahead of me and those behind me. Maybe it was only a few metres. “80 metres,” someone shouted from below. 80 metres. 8 multiplied by 10. 8 metres meant at least 8-10 steps. Could I go 100 steps?
I took a stride. One step. Sweat broke out on my forehead. My heart beats scaled up uncomfortably, my breath hitched. There were 79.3 metres to go. I couldn’t lose it. Not at this point. Shivi urged me up. But the guy ahead of me was lagging, huffing and puffing, going incredibly slow. In opposition to my heart beat which had turned mindbogglingly rapid. I started breathing fast. A bit too fast. There was much less oxygen. I needed air. I needed the sun. I realized then why they worshipped Ra, the Sun god. And Shu, the wind god. 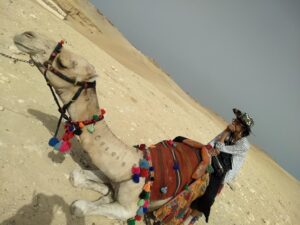 “I can’t go any further,” I choked out some words. I cried to Nina to get back down. I needed to stand straight. I needed to effing breathe. I don’t do well in closed spaces. My mind seemed like it would shut down. There were people ahead of me and people behind me. My hands were trembling, my legs were shaking, I was shivering all over. I don’t remember when I got back down and till when I stayed back with Mohammed, our Egyptologist. Mohammed tried telling me stories about the pharaohs. Good stories. (As if there were any! All they cared about were their funeral-f*king-rites and their After-effing-lives.) I didn’t realize when my companions crawled to the sarcophagus and when they returned to me. All I noticed was coming out of the trapped caves in the pyramid to the bright glare of the sun and mounting my Michael Jackson to reach the Sphinx. I would choose the sand storms over the narrow cave and the scarabs any day. 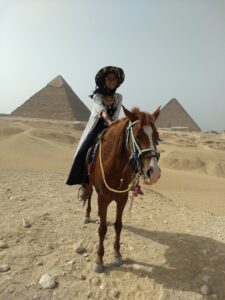 The face was disfigured, the nose broken, rather it was smudged where the nose should have been. And of course, the ears had been sheared right off. I had imagined something far more refined but when has reality ever lived up to one’s imagination? The yellow, red and green lights of the previous night had raised the bar for the morning view, rather the afternoon one. The sound and light show last night had reminded me of Indiana Jones. To be honest, I almost felt like Indiana Jones, all set for exciting discoveries. Of course, I was far removed from the amazingness of His Majesty. But being there, a speck in the sand of time felt like a sublime thing in itself. The Sphinx stood proud, the head of a pharaoh signifying wisdom and the body of a lion denoting strength. The origin of the sphinx is an unraveled mystery. It is said that the Sphinx was built in the likeness of the pharaoh Khafre who built the second great pyramid (after the first Great Pyramid at Giza by Khufu), followed by the third pyramid by Menkaure. But no such connection has been definitively made between the two as yet. Some say that the Sphinx is older than the pyramids, having been built some ways off from the three great pyramids at Giza. Some say it dates before the Old period, Egyptian history being divided into the Old, Middle and the New Ages.

Here let me give you a lowdown on Egyptian history. So, the Great Pyramids at Giza were built in the Old period by the Pharaohs- Khufu, Khafre and Menkaure (Cheops, Chephren and Mycerinus in Latin). The capital then changed to Luxor in the Middle period, the time when Egypt was ruled by the likes of Akhenaten and Nefertiti and the famous king, Tut (Tutankhamen) who died at a very tender age of eighteen but grew more famous than anyone else in the entire Egyptian period. 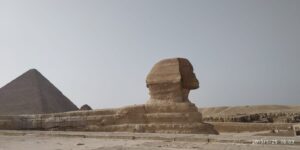 The sun glowed red, yellow and pink. The end of the day was near. Michael Jackson was a bit weary now and even Mohammed showed signs of running out of stories and nuggets of history, although Nina, Shivi and I were spellbound by his recent discovery of some tombs. It was Ramadan and there was a quickening of the pulse in the natives as they waited for the sun to set so that they could break their fast and begin the ‘iftaar’. We partook in the celebrations as well. Our time around the pyramids was drawing to a close. We were heading for the Nile now…some cool beverages and some traditional sweets were in order. 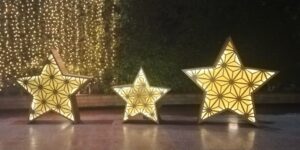 The Quest For Lassi